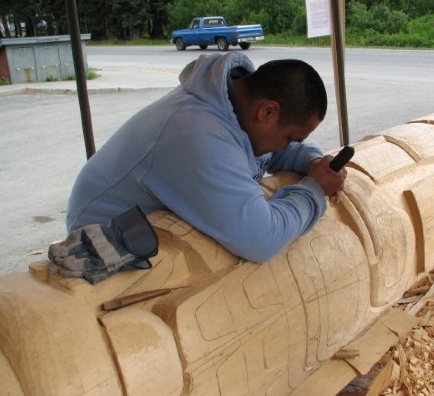 Daniel Klanott, Lei.naa, is Gaanaxteidi from the Whale House in Klukwan.  Daniel has been carving since 2002.  Some of the larger projects he has been a part of in Klukwan are:

Daniel enjoys working with the other carvers and sees each project as a learning experience.  Like most of Klukwan’s carving crew, he has made some of his own tools to use on these projects.  Some of his other interests are native dancing and learning the Tlingit language and helping the Haines softball little league by coaching for three years, and by being an umpire for local games and tournaments.  He is also in charge of Kllukwan’s local men’s and co-ed softball teams.  Along with his younger brother, Jeffery he is part of Klukwan’s basketball team and takes part in Haines’s local tournaments.

Daniel has also worked on some individual projects: